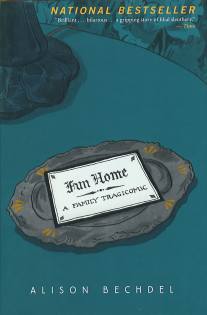 There is a tendency within the literary world to consider graphic novels as “lesser” compared to other more classic mediums. Many professors will argue against the use of graphic novels within classroom settings because there is a standing stigma that graphic novels aren’t as academic as “normal” novels. As more and more graphic novels crop up into required reading lists, the conversation surrounding the merit of this different form of writing has been increasingly popular.

While using artwork to assist storytelling is considered childish by some, there are many examples that fight against this. Many graphic novels are not only aimed at adults, but would be considered inappropriate for children. Graphic novels such as Alison Bechdel’s Fun Homecontain story lines meant for mature audiences. Specifically, in Fun Home the medium allows for a serious and at times dark story to be lightened through the use of images. The story comes across as more real than depressing.

There are many ways to tell a story. To immediately exclude an entire medium due to stereotypes would risk missing out on unique stories and perspectives. Not every graphic novel is going to be dripping in literary usefulness and beauty, but neither is every novel. We cannot exclude an entire genre simply because we associate it with children.