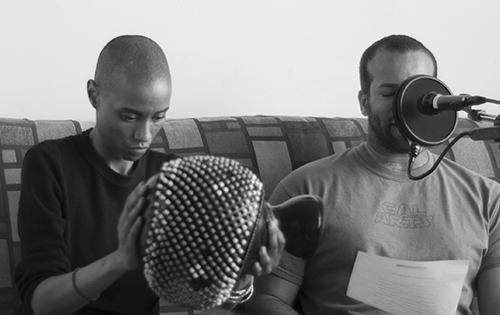 Douglas Kearney is either a madman or a genius, honestly.

Douglas Kearney, an out-of-the-box poem master from California, came to perform recently at Coe College for an opening of his latest collaborative show, Them Loud-Ass Colored Silences, produced along with an electronic music artist from Haiti, Val Jeanty.

Sitting (standing) in the back of the stage at Sinclair auditorium staring at the Dijon mustard-colored curtains; I was wondering why there weren’t enough chairs when there were three stacks more in the holding room behind us. Then Doug came up to the microphone and introduced himself and Val, and what happened for the next two hours I don’t yet possess the facilities to explain fully.

If I were to attempt, I can say that his poem format is a VERY accurate rendition of what the poem sounds like when performed. All the hard planes of the words, crashing into one another and bouncing and reverberating off one another, and Val’s backing ambiance never detracted from what I was hearing, and it was amazing to witness. I think my brain went into shock half-way through the performance, because all I can recall back to memory is very specific things, like the feeling of the downbeat thrumming in not just my chest, but my entire body. It definitely added to the experience to be standing, as it made the vibrations feel so much more intense.

I will say honestly I was more excited about Val than Doug. I did a little digging around before the event and found that she worked with some artists that come up from time to time on my Spotify (the prime one being the Zodiac Suite: Revisited by The Mary Lou Williams Collective), and I listened to a few selections of her work—which just listening to them in a headset while reading was a mind opening experience. Initially I wanted to talk to both of them after the show, but Doug had about 30 people gather around him immediately, and Val didn’t have anyone come up to her, so I went straight for her and got her autograph and got to talk about music for a few moments. And now that autograph is plastered into my own personal clippings book for all eternity.

I really wanted to get a book of Doug’s poems to go—mostly for the thought that if all his poetry is laid out like the three I’ve looked at I wanted to own a book of it just to learn how to use the layout. But since I’m a broke college student and have no extra money right now, I will just have to wait for another time.

If you want check out more of Doug’s poetry, check his website out here.

If listening to some electronic beats is more your speed, look at Val’s Soundcloud here.

Image from the Poetry Foundation.